The Ravens offensive line avoided costly mistakes against the Dolphins in the opener. 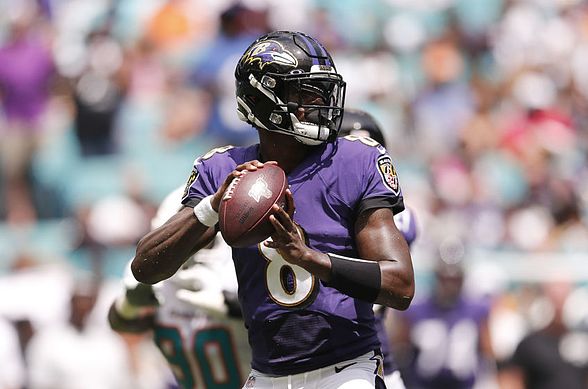 The lone sack occurred on what appeared to be a busted play where the line was expecting something else (they were all blocking to the left) and Jackson made a play-action fake to no one before tucking and running (Q2, 10:38).  That play was the only time either Jackson or Griffin was knocked down in the pocket.

The Ravens afforded Jackson ample time and space (ATS) on 8 of 21 drop backs (38%), which is unexceptional, but a function of Lamar’s early success.  Let’s review:

Using Flacco’s results with and without ATS from 2009-17 as a baseline, Lamar should have been expected to throw for 119 yards.  He exceeded that by 204 net yards, which is a larger positive deviation from expectation than any game Flacco had over the period I collected the data.

The Ravens ran 70 scored snaps (excludes accepted penalties which result in no play, kneels, spikes, and special teams plays that result in a run or pass).

Stanley:  Ronnie had a solid game in most respects, but 2 holding penalties ruined his score.  He was beaten inside by Jerome Baker for a full pressure (Q3, 10:26). He appeared to again be beaten inside for a pressure by DE Charles Harris (Q3, 4:27), but I can see no evidence of a hold.  At that point, the Ravens were enjoying a substantial lead both on the scoreboard and in flags, but Ronnie could be seen watching the video replay in frustration. Of 6 missed blocks, I have him beaten at the LoS on 4 by Harris.  He had 5 blocks in level 2, 2 pancakes, and pulled successfully on his only attempt. On the first drive of the game, he blocked 2 men on the same highlight play (Q1, 11:49). I didn’t score it as a highlight, but he flattened the DT opposite Bozeman on the 83-yard TD pass to Brown and was signaling Lamar to run left with the field open.  Fortunately, Lamar kept his eyes downfield and delivered the pay of the game after a leisurely 3.50 seconds in the pocket. He was retired for the day prior to the final drive and was replaced by Hurst. 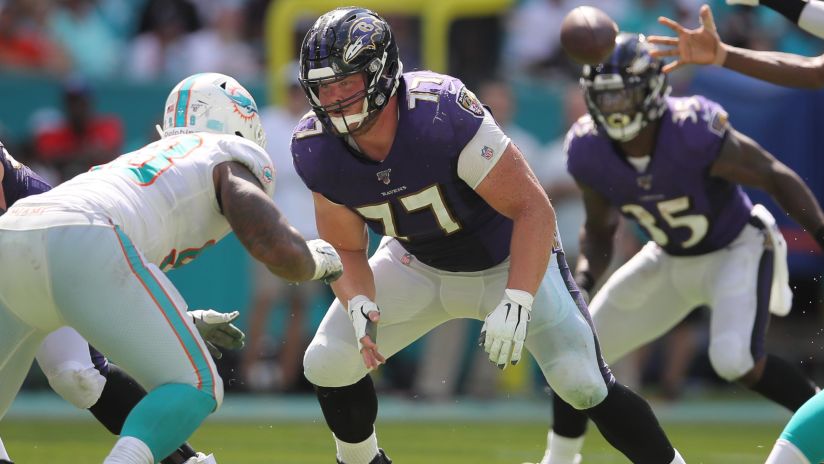 Bozeman:  Bradley’s start at LG was kept under wraps until approximately 2 hours before game time, but he delivered a solid start with a heavy reliance on mobility.  He was asked to pull on 14 occasions and completed 12 which helped lead some of the game’s biggest run plays, including Ingram’s 49-yard run to open the season (Q1, 14:56).   He surrendered 2 full pressures, including a late blitz pickup on LB Jerome Baker (Q3, 8:50) and a bull from DT Davon Godchaux (Q3, 3:55). He missed a troubling 8 blocks at the LoS, plus 2 others (one in L2, one on a pull where he was blown up by penetration).  The misses at the LoS were a combination of problems, including missed cuts, being shed, and being beaten to either side by quicker defenders. Given he had 230 scored snaps at guard as a rookie, he should be passed issues with not knowing his assignment, but he occasionally appeared slow to respond to either gap.  He had 6 blocks in level 2 and delivered 1 pancake. His highlight was a 10-yard drive of DT John Jenkins (Q2, 1:59).

Skura:  Matt had a solid opener.  He received a half charge on 2 shared pressures, 1 with Yanda (Q2, 7:43), and 1 with Bozeman (Q4, 7:16).  I also charged him with ¼ of the penetration (Q4, 7:59) where he appeared to be tripped up by Mekari and then fell on the football after the whistle had blown to stop Hill’s forward progress.  He missed 6 bocks, which is a lot for a center. All of those were losses at the LoS, so it’s a tendency to be monitored. Matt made 5 blocks in level 2, had 1 pancake, and delivered an effective block on both pulls.  He deserves credit for the fact the Ravens connected on 17 of 19 pulls as a team, because most of those passed behind him. I did not score a highlight for him.

Yanda:  Marshal continues to open one side of the gate on the bulk of the Ravens power runs.  He played 3 quarters before retiring and had just 2 half-pressure charges. I scored him with just 1 missed block where he was shed by 1st-round pick Chris Wilkins.  He had 3 blocks in level 2, did not have a pancake or highlight, and made his only pull.

Brown:  Orlando’s performance stood out as the best on the OL and was a welcome sight after an uneven preseason.  He was beaten outside by DT Wilkins for a half pressure (Q3, 8:03) and allowed a half penetration on an ugly busted run play (Q4, 10:15) when he whiffed on DT Godchaux.  He missed just 1 block, which came when driven back by DE Ledbetter (Q2, 4:19). He made 4 blocks in level 2 and was not asked to pull, but consistently made his seals and kickouts in the power run game.  His highlight was a combination on DT Wilkins then LB McMillan on the Ravens first touchdown (Q1, 10:38)

Mekari:  Patrick entered for the last 2 series and had an uneven showing.  That’s a marginal concern given his difficulties occurred when the Dolphins defense had been worn down by a long day at the office.  He was bulled into Griffin by DT Wilkins for a full pressure charge (Q4, 4:26). He also had a ¼ share of the penetration described above for Skura (Q4, 7:59).  Of 3 missed blocks, 2 were less costly failures to find a block in level 2 (L2NB).

Hurst:  James entered at LT for the final drive and made 12 of 13 blocks.  That’s short of the 20 snap minimum I have to assign a grade, but a good performance nonetheless.

If your interesting in seeing scoring trends for the players this season, those charts will be posted shortly and updated weekly. 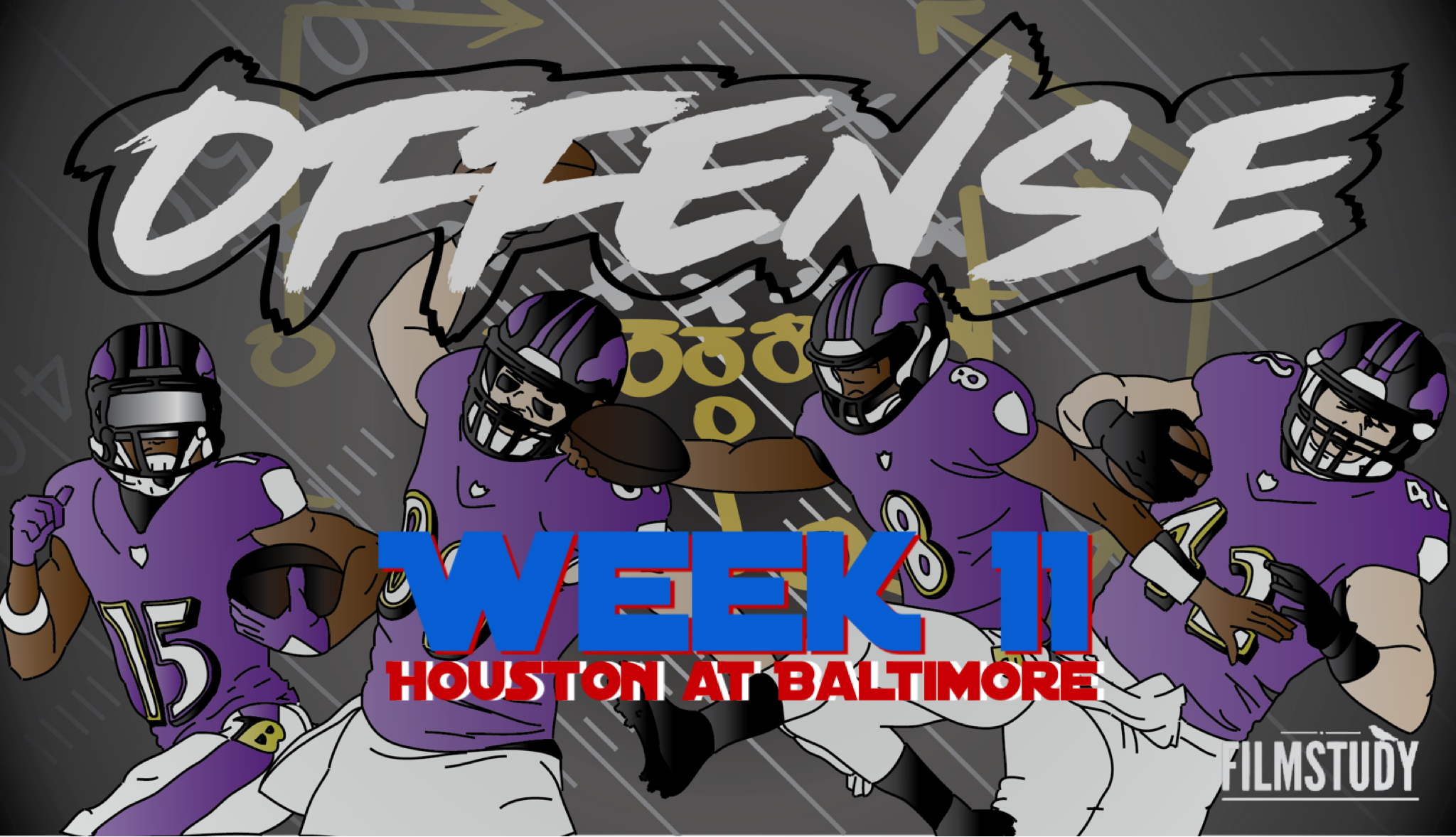