The Ravens ran a franchise-record 92 plays and had 91 scored snaps (excludes accepted penalties which result in no play, kneels, spikes, and special teams plays that result in a run or pass).

Stanley:  Ronnie had his worst game of the season.  He was beaten inside by Jurrell Casey for the sack/fumble that set up the final Tennessee TD (Q3, 6:54).  He was bulled Landry to flush Jackson on the final play from scrimmage of the first half (Q2, 0:11) for which he gets the charge for the cleanup QH.  I scored him as having a share of 11 total pressure events on the night.  Aside from the above sack and QH, those were:

He missed 4 blocks, of which 2 were losses at the LoS.  Stanley made 2 blocks in level 2 and made his only pull.  He did not deliver a pancake nor did he have a highlight.

Stanley’s struggles reflected the game-plan adjustments required by circumstance.  Because the Ravens had to abandon the run for most of the scored snaps, neither he nor Orlando Brown had the simpler assignments created by the read option.  They also did not benefit from controlled rush lanes which the Ravens have typically faced this season as a measure to contain Jackson.

Bozeman:  Bradley had another good game despite a costly missed block.  He surrendered a pair of shared pressures on double teams to DT Simmons (Q1, 8:02) and DT Casey (Q2, 0:18).  Of 8 missed blocks, 7 were losses at the LoS, including his most significant missed block of the season.  He pulled on the first 4th and 1 (Q2, 15:00) and didn’t find a block until after the play had been decided.  In the process, he obstructed potential paths for Jackson and lost an opportunity to push the rugby scrum for the needed yardage.  He had 1block in level 2, and connected on 4 of 5 pulls.  He did not have a pancake or highlight.

Mekari:  Patrick fell short in a difficult night against the interior behemoths of the Titans.  Jurrell Casey had one of the most athletic sacks you’ll ever see by an interior linemen on which he bulled Patrick, spun off him to leave him on his knees, then took down Jackson for a loss of 8 (Q2, 0:31).  He gave up 3 full pressures to DT DaQuan Jones (Q2, 1:08, bulled; Q3, 14:55, bulled; Q3, 11:09, bulled/shed).  He missed 12 blocks, 8 of which came at the LoS.  He had 3 blocks in level 2 and was successful on his only pull.  He did not register a pancake or highlight.

Yanda:  Marshal played well and left us wondering if he’s played for the final time.  He failed to pick up the stunting Correa for a half share of his sack (Q2, 1:47).  His only full charge was a pressure allowed by bull rush to DaQuan Jones (Q4, 11:09) on the only Ravens TD.  Of his 4 missed blocks, 2 were losses at the LoS.  He made 1 block in level 2, delivered 1 pancake, and connected on 3 of 3 pulls.  His highlight was a help block to flatten OLB Derrick Roberson who had just executed a spin move versus Brown (Q4, 13:47).

There are lots of reasons to defer official announcement of retirement.  It gives him an opportunity to consider the 2020 team’s chances.  It gives the Ravens time to work on a replacement from a position of strength.  It also gives the Ravens a chance to make him a contractual offer he can’t refuse.  His actions after the game strongly indicate retirement in terms of taking pictures with family on the field and referring to the team in the third person.  Whatever his decision, I hope Baltimore fans will support the choice and I have personally enjoyed (and will continue to enjoy) scoring every block of his Hall of Fame career. 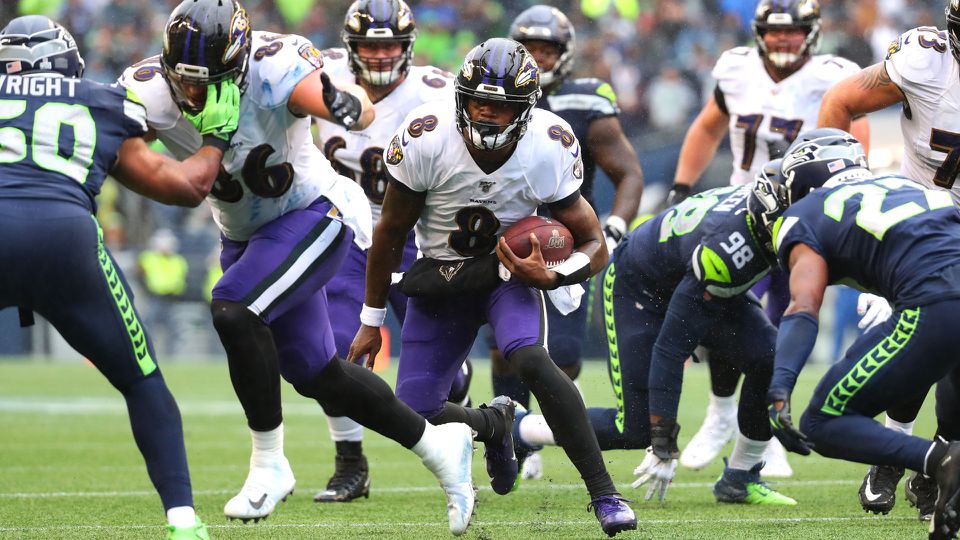