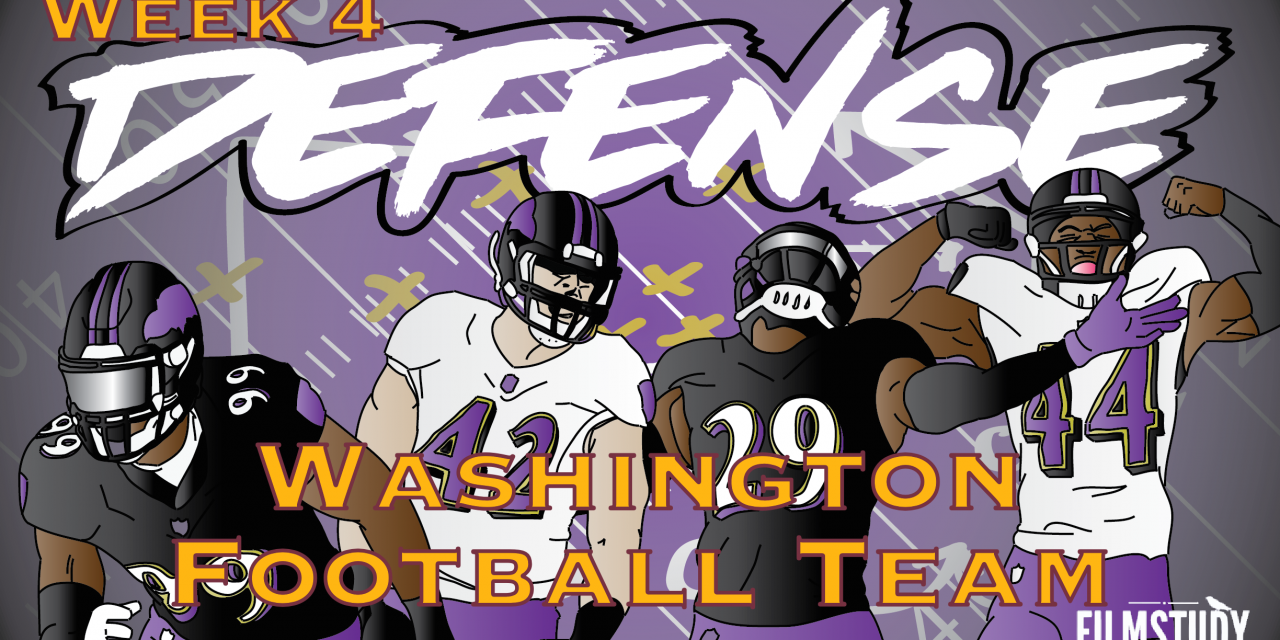 Learning to Play the Game

Patrick Queen’s imprint on the defensive scoresheet was significant with 12 tackles (9 solo), including 3 for loss, and contributions to 7 defensive wins.

However, Queen remains extremely green in terms of both play recognition and knowledge of responsibilities.

It’s easy to misdiagnose responsibility when charting plays, but two of the indicators I look for are body language and nonverbal signals, particularly from his teammates.  Sometimes they are subtle, like Marcus Peters walking off the field after the 49-yard TD last week with hands hanging limply on both sides.  At Washington we saw:

Watching him fly around the field, the athleticism is constantly on display.  He added some outstanding gap penetration vs the run this week, but he remains infuriating in coverage assignments.

Missing the preseason and OTAs cannot have helped Queen improve his processing, so I’m going to choose to look at the glass as half full.  If he can make this many plays when he’s doing so much wrong, it’s fun to think how good he’ll be when he learns to play his position.

Much of what the Ravens needed to accomplish in this game was to deal with the versatility and speed of RB/WR Antonio Gibson and the explosiveness of WR Terry McLaurin.  That simplified many of the package decisions in this game.

Jumbo (1): On the Ravens lone snap of goal line defense, Queen met Barber for a loss of 1.  That snap was 14 jumbo personnel (Sharpe eligible).  However, on the very next play, Washington reverted to 21 personnel and the Ravens returned to the nickel as Gibson punched in the 2-yard TD.

On the final WFT drive, following the bomb to McLaurin that gave them 1st and goal at the 3, the Ravens declined the opportunity to insert the jumbo (or even a base) package, but instead stayed with the dime.  Washington took 3 tries to run for the TD, but Haskins finally snuck in in on 3rd and 1.  Last year at Buffalo, we saw Martindale call for an intentional encroachment (by Clark) to insert the goal line package.  It’s mildly surprising the Ravens did not call a timeout to position a heavier front, even vs 11 personnel.

Washington ran a fair number of plays using 21 personnel with either Gibson or McKissic split wide, but the Ravens response was a standard nickel package.  As Mark Bullock discussed on the Know Your Foe podcast, this has been the typical opponent response.  After an off game against the Chiefs, the Ravens return to strong and balanced nickel results was a welcome development.

Rush Nickel (2): The Ravens showed a new look for both 3rd downs on the first drive while Deshon Elliott was injured.  This could also be described as a heavy dime.  Rather than deploying Anthony Levine as a dime back (he was active but on the injury report all week), Martindale inserted Chris Board with 3 OLBs, Queen, Campbell, and a standard nickel secondary.  Board was aligned by Smith to man coverage of TE Logan Thomas on the left boundary on 3rd and 10 (Q1, 13:22).  He then lined up in the A gap and rushed on 3rd and 6 (Q1, 10:26).

I don’t expect we’ll see this package again unless it comes as a result of injury.  However, if Levine was truly unable to play defensively in this game, and Martindale was unwilling to use special teams ace Jordan Richards in such a role, it’s a little surprising neither Geno Stone nor Nigel Warrior was activated as a 4th safety.  That’s a more striking choice given the Ravens played this game with just 7 DBs (including PS callup Dorsey) other than Levine/Richards.

Jumbo Nickel (5): Martindale deployed the package 5 times, all on 1st or 2nd down, and each with Queen as the lone ILB.  Washington gained just 9 yards (1.8 YPP), including 3 incomplete passes.

Dime (22): The Ravens showed a pair of dime looks, primarily on 3rd down, but also end of half/end of game.  Summarizing the results:

Campbell was the lone DL on all 22 of these plays.

Martindale employed a pass rush that was passive both in terms of numbers and scheme.  Effectively, he chose to allow Haskins to make unforced errors.

Haskins had Ample Time and Space (ATS) on 20 of 48 drop backs (42%) which is lot for today’s game.  On 15 occasions, he threw a pass before the rush had a chance to develop (ball out quick or BOQ), so the Ravens had just 13 pressure events among 48 drop backs.

Martindale sent just 10 individual blitzes from off the LoS, including 3 each by Clark and Fort.  Despite the reduced blitz total, the Ravens stunted on only 2 plays (3 stunts) which resulted in a QH (Q2, 1:27) and an ATS play that went for 39 yards to McLaurin (Q4, 3:29, 2 stunts).  The Ravens also dropped 2+ defenders from the LoS to cover on 3 occasions.

In total, the Ravens showed a deceptive rush on 5 drop backs which resulted in 45 yards.

Despite frequent ATS, Haskins did little to effectively extend plays, which led to an average time to throw of 2.42 seconds (tied for shortest in week 4 through games of Sunday), an average completed air yards of 3.2 (4th shortest), and an average intended target depth of 4.7 yards (shortest) per Next Gen stats.  With the exception of the bomb to McLaurin, the Washington offense was primarily a mix of screens, rubs/picks, and shallow crosses.

I don’t think Martindale has suddenly developed a reluctance to apply pressure because Mahomes picked them apart on Monday Night Football.  In this game I think he dialed down the scheme and numbers to keep Haskins contained, because he expected quick-release passes, and because he hoped for more unforced mistakes.  One way in which the passive scheme should have helped was in defensing screen passes.  However…

The ILBs and screen-side edge defender are players who need to diagnose these quickly to minimize their impact.  Washington was consistent (and effective) in their efforts to cut block the edge defender.  They also had excellent outside blocking from receivers.  That left ILBs as the players with the best chance to read and react.

In these cases, I think it worthwhile to look for common threads.  Here are my notes on what happened to the edge defender and ILB on each screen:

The Ravens had just 4 DL active (excluding Ricard) so each of Campbell (54 snaps), Ellis (25), Washington (22), and Williams (30) had a larger workload than normal.  Campbell’s 22 additional dime snaps are most of the workload difference from the others.

Campbell had a pair of QHs and knocked down a pass, but the others contributed just 1 pressure (Ellis, Q3, 7:28)

The Ravens missed Derek Wolfe both for his contributions to the pass rush and the plays he could have spelled Campbell.

As a unit, the team effectively neutralized the run for 3.1 YPC and held the point of attack to allow playmaking (primarily by Queen).

LJ Fort (33 snaps) again played well.  He continues to split WLB responsibilities with Harrison, but also played 12 snaps of MLB when Queen was out in the second half.  He’s still played barely a full season of ILB snaps in a 9-year career, but he’s the veteran clearly charged with ensuring Queen, Harrison, and Board play their roles correctly.

The absence of Malik Harrison (10 snaps) to date may have more to do with the interaction between Fort and Queen than his own play.  Queen clearly needs oversight getting lined up on a snap-by-snap basis.  If Harrison is the WLB, that duty might have to fall to Clark, which would not be optimal.

Marcus Peters was flagged twice for defensive holding, but otherwise was solid in coverage with a 9-yard completion allowed to Sims along with good deep coverage of McLaurin and Inman on an incomplete to each.  He nearly came up with another interception on the PD by Humphrey (Q3, 3:48).

Deshon Elliott played well and we saw more of his range on the back end.  He allowed 2 completions for 21 yards as I scored it, but in 2 cases he helped clean up Queen’s mess:

Matthew Judon (40 snaps) had a big day as a pass rusher: 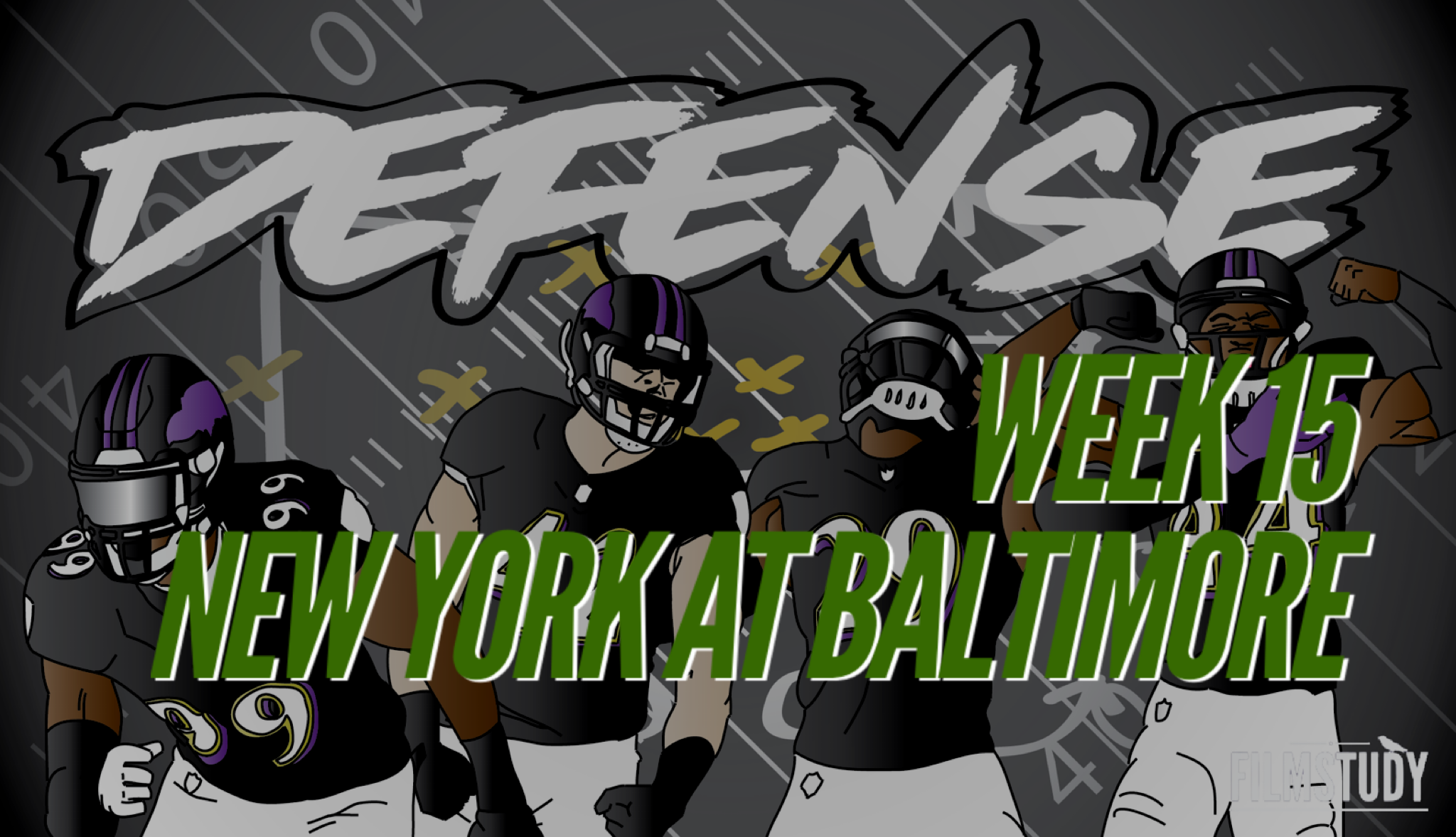 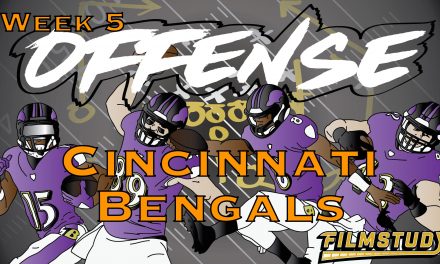 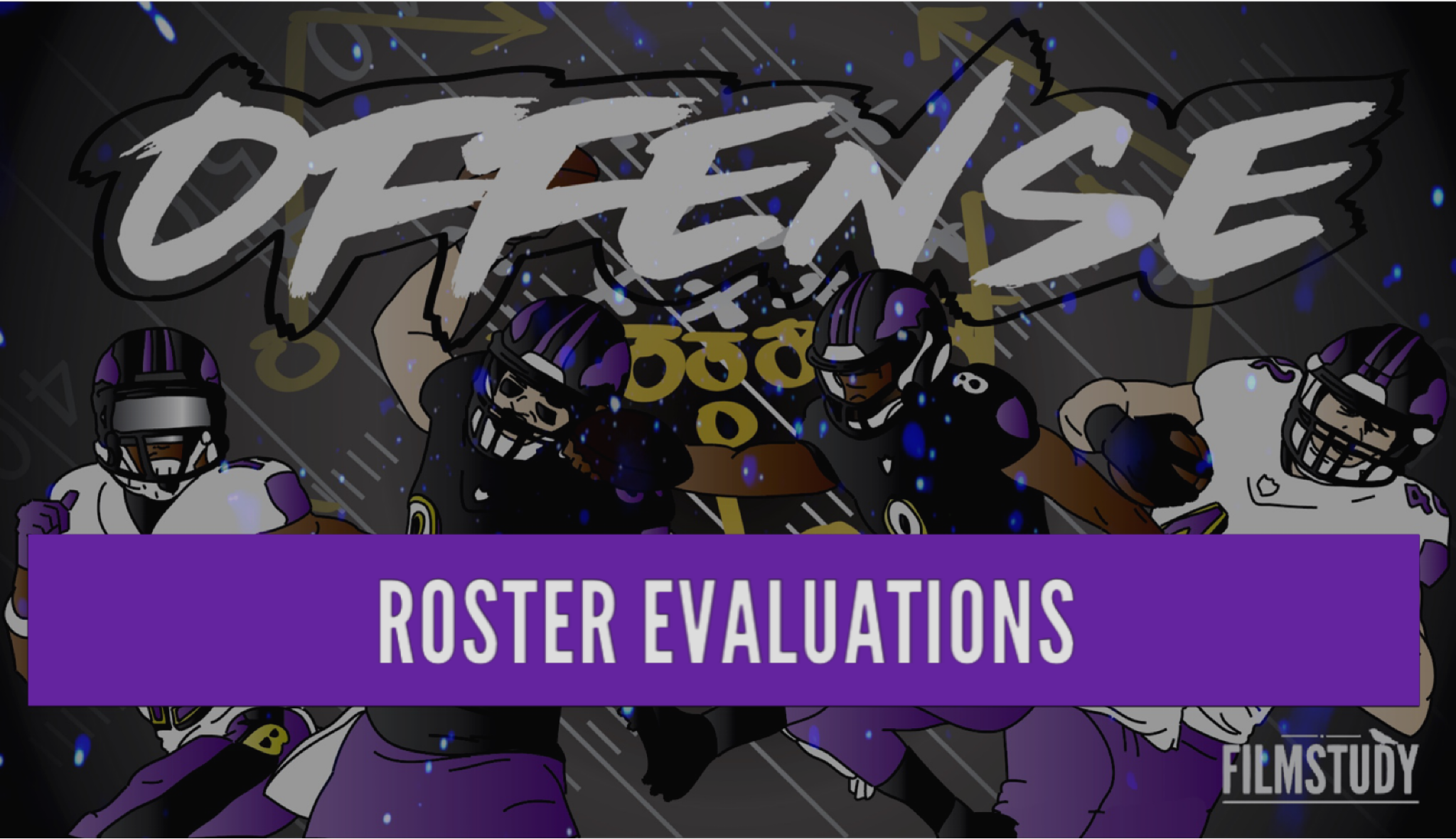 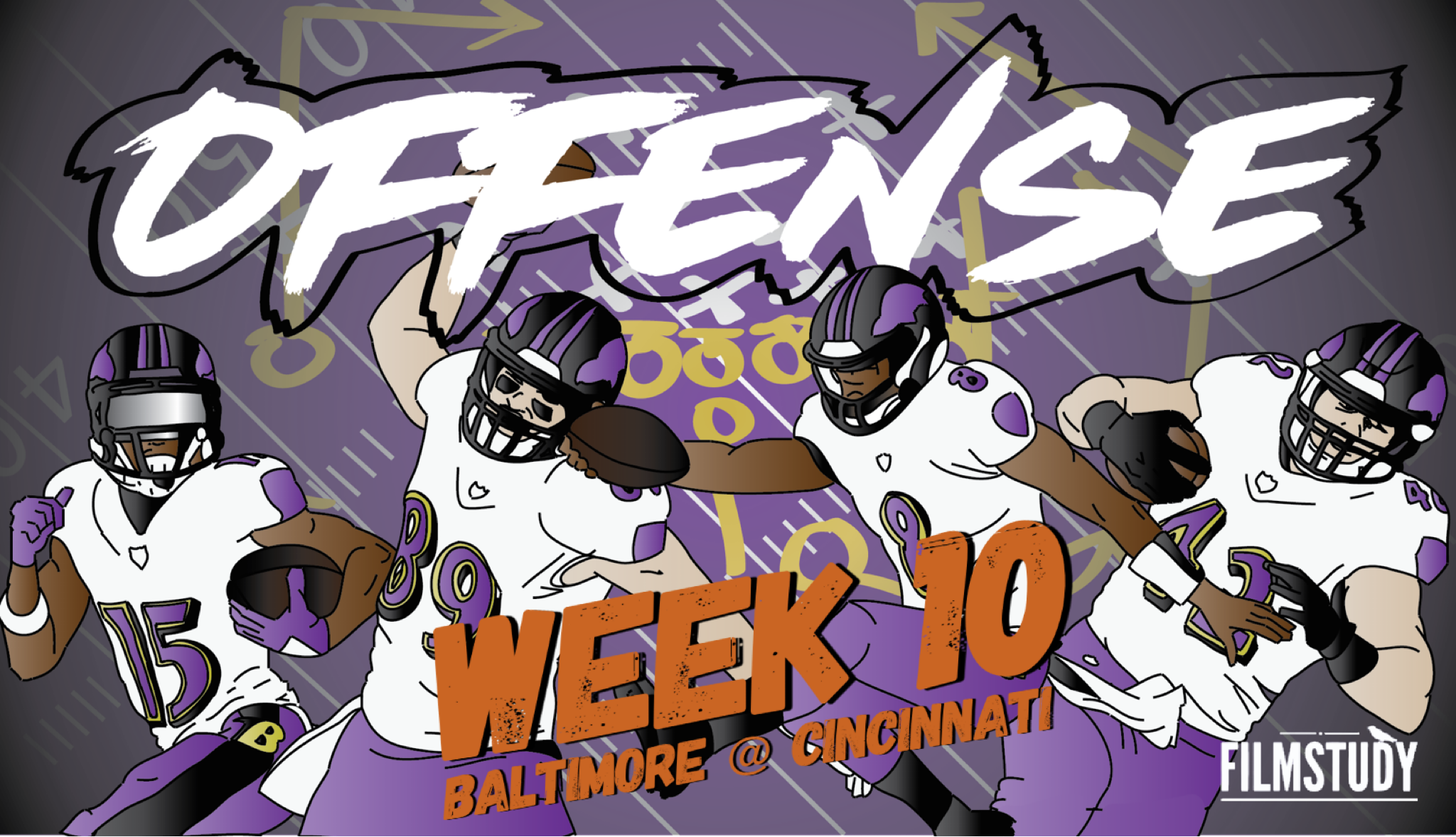