Looking in the Mirror 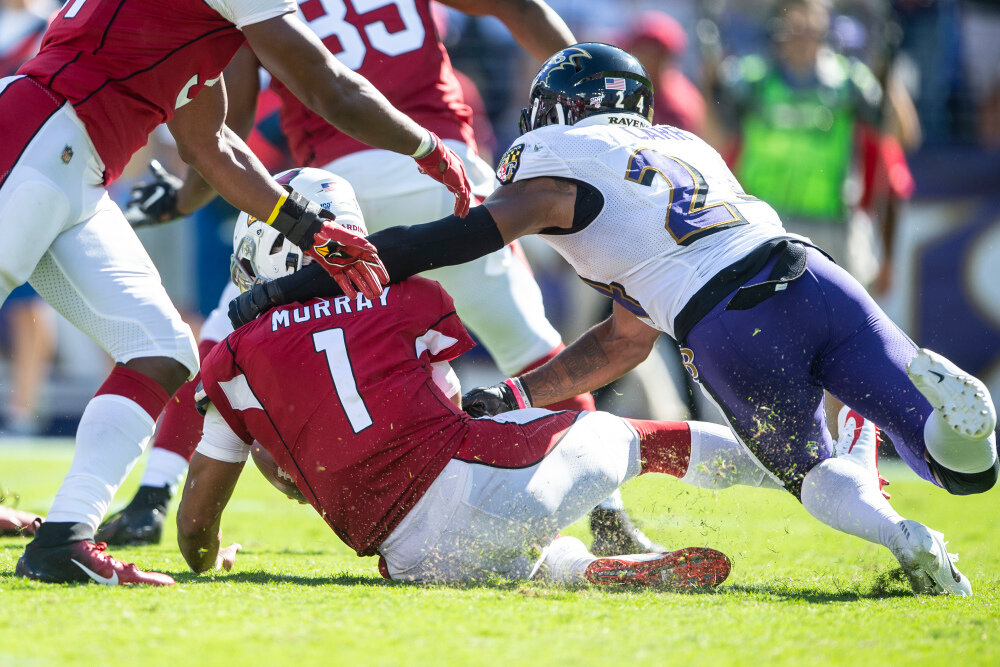 The Ravens played a slightly different version of themselves and won a game they dominated by just 6 points.

They won special teams with 3 long FGs (including a 51-yarder), outstanding kick/punt coverage, and a pooched kickoff to the corner which backed the Cardinals up to their own 6-yard line late in the first half.

On defense, they did a lot of things right, including:

Then there were the blown zone coverages.  Let’s review 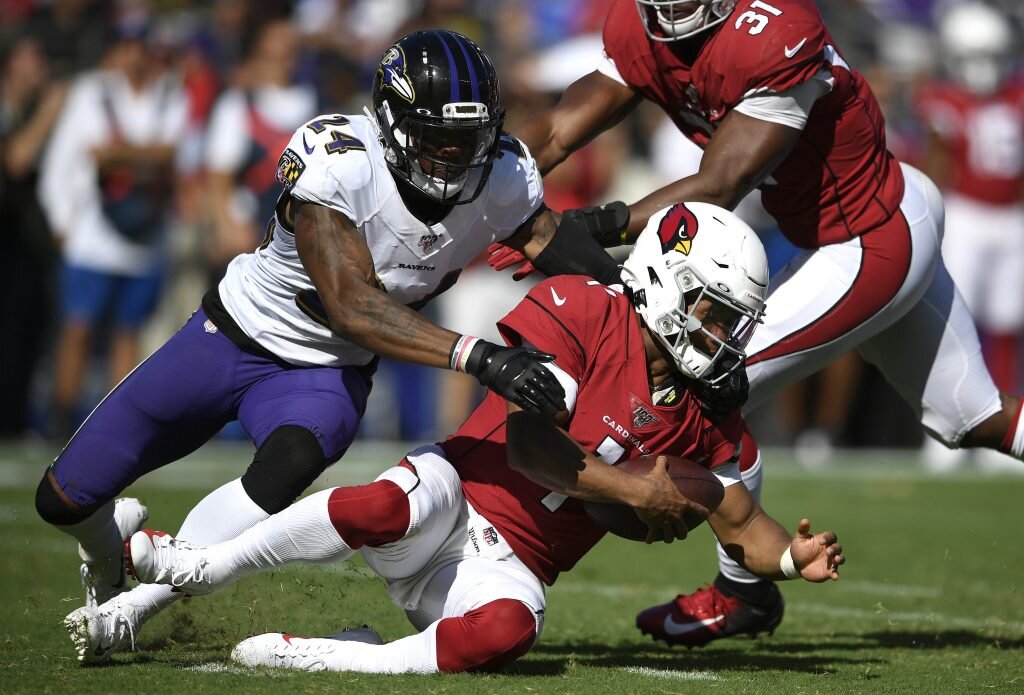 These 5 plays accounted for 175 of the Cardinals 329 net passing yards.  With the exception of Carr, every starting DB and both ILBs were involved in one or more of these breakdowns.

The Ravens again activated just 4 DL, including Patrick Ricard, but it was far less risky versus the Cardinals against whom they did not play a single snap with 3+ DL on the field.  Similarly, they made do with just 8 total front-five (OLB + DL) players, because they never had a snap where more than 4 were on the field at once.

Daylon Mack and Jaylon Ferguson both sat again in favor of special teamers.  While I would have enjoyed seeing Ferguson work against an offensive line in shambles, the Ravens had difficulty making situational substitutions due to the no huddle.

A New Scheme versus the Spread Offense

The Cardinals averaged 3.53 WRs per play and just 0.40 TEs per play in week 1.  I have never seen offense personnel figures as extreme and there was mention on the broadcast the Cards had more 10 personnel packages (1 RB, no TE) than all other 31 teams combined in week 1.

As a response, Martindale split the defensive packages between nickel (28 snaps), and dime (25) with 1 spike.

The nickel snaps were each of the standard variety (3 cornerbacks, 2 safeties) with Carr at SCB and none of the big nickel (3 safeties, 2 cornerbacks) used against the Dolphins.  The dime plays included 6 of the standard variety with Anthony Levine at dime (WLB), but 19 others with 4 CBs and 2 safeties. On the bulk of the 4-CB dime snaps, Thomas continued to play single high and Jefferson moved up to play next to Onwuasor.

The 4th CB added was Jones for 9 snaps (all in the first half) and Canady for 10 snaps, including the final 8 deployments.  Jones may have lost the role when he failed to find the football in the air on a 13-yard pass to Byrd to convert 3rd and 6 by the left sideline (Q2, 3:23).  I did not record Canady as the target on any throws.

It was a game of contradiction between individual contributions and team results, largely based on the handful of blown zone coverages detailed above.

Michael Pierce (22 snaps) shed RG Sweezy to tackle RB David Johnson for no gain by the left sideline (Q1, 13:37).  He beat LG Justin Pugh outside for a fast pressure where Murray grounded the ball into the butt of RG Sweezy, but was not called for intentional grounding (Q4, 3:48).  He twice beat C AQ Shipley with minimal impact. The first came on a pass when the ball was out quickly for an 8-yard gain (Q1, 4:34). The second came at the goal line when he penetrated 2 yards into the backfield past Shipley, but Tim Williams failed to maintain containment and Brandon Williams was double teamed to open the hole for Johnson’s TD (Q4, 12:54).

Team stats were bad with Pierce in the game (10.6 YPP, including yards per pass play), but I have a difficult time finding fault with his play.

Patrick Ricard (12 snaps) had a similar fate to Pierce.  He provided front-side pressure on Judon’s sack and split a sack with McPhee.  He also had a nice hustle tackle on a 6-yard pass to Byrd after Jefferson missed the tackle (Q2, 12:43).  Nonetheless, the Cards averaged 10.1 YPP on his 12 snaps.

Matthew Judon (43 snaps) led the OLBs in playing time.  He had a fast-developing S-6 where he beat RT Justin Murray to go with 2 other QHs and 1 other pressure. I don’t have any notes (positive or negative) regarding edge setting, but the Cardinals ran for just 16 yards on 9 run plays while he was in the game.

Tim Williams (22 snaps) took a step backward from his fine game in week 1.  I did not score him for a single pressure event (18 pass snaps) and he lost the left edge on Johnson’s TD run when he followed Murray’s fake, which Thomas could have done alone.

Patrick Onwuasor (53 snaps) played the entire game with the green dot.  In a game with few run plays, he had 4 tackles, but he missed a tackle on the 40-yard completion to Fitzgerald (Q3, 12:28) and looked unimpressive in coverage, including a mention in 4 of the 5 zone-coverage plays mentioned above.

To be clear, it’s unlikely these plays were all Onwuasor’s responsibility, but there is a damning consistency to his inability to contribute on pass plays behind him.  When Levine is not on the field, the coverage weaknesses of the ILBs looms as a significant problem against the better teams in the league.

Brandon Carr (53 snaps) had an outstanding game at SCB.  Summarizing:

Brandon signed a 4-year contract that was effectively a series of 1-year deals for approximately $6M each.  Now 2 games into the 3rd season, his play has been a bargain by any objective standard and the team’s final 2020 option appears to have significant value.

Marlon Humphrey (53 snaps) turned in a game of astounding big plays in addition to his role in some coverage slips (see above).  Again, in racing form:

Humphrey is using his physicality as effectively as I have ever seen from a corner, but he may need to learn to be more selective for longevity.  Fortunately, the master of CB durability is his teammate Carr. 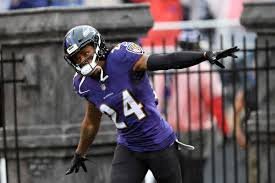 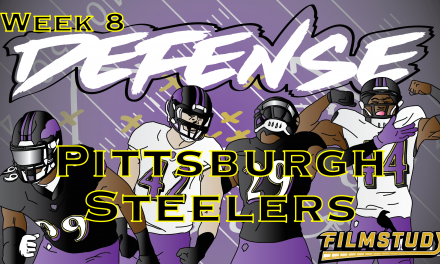 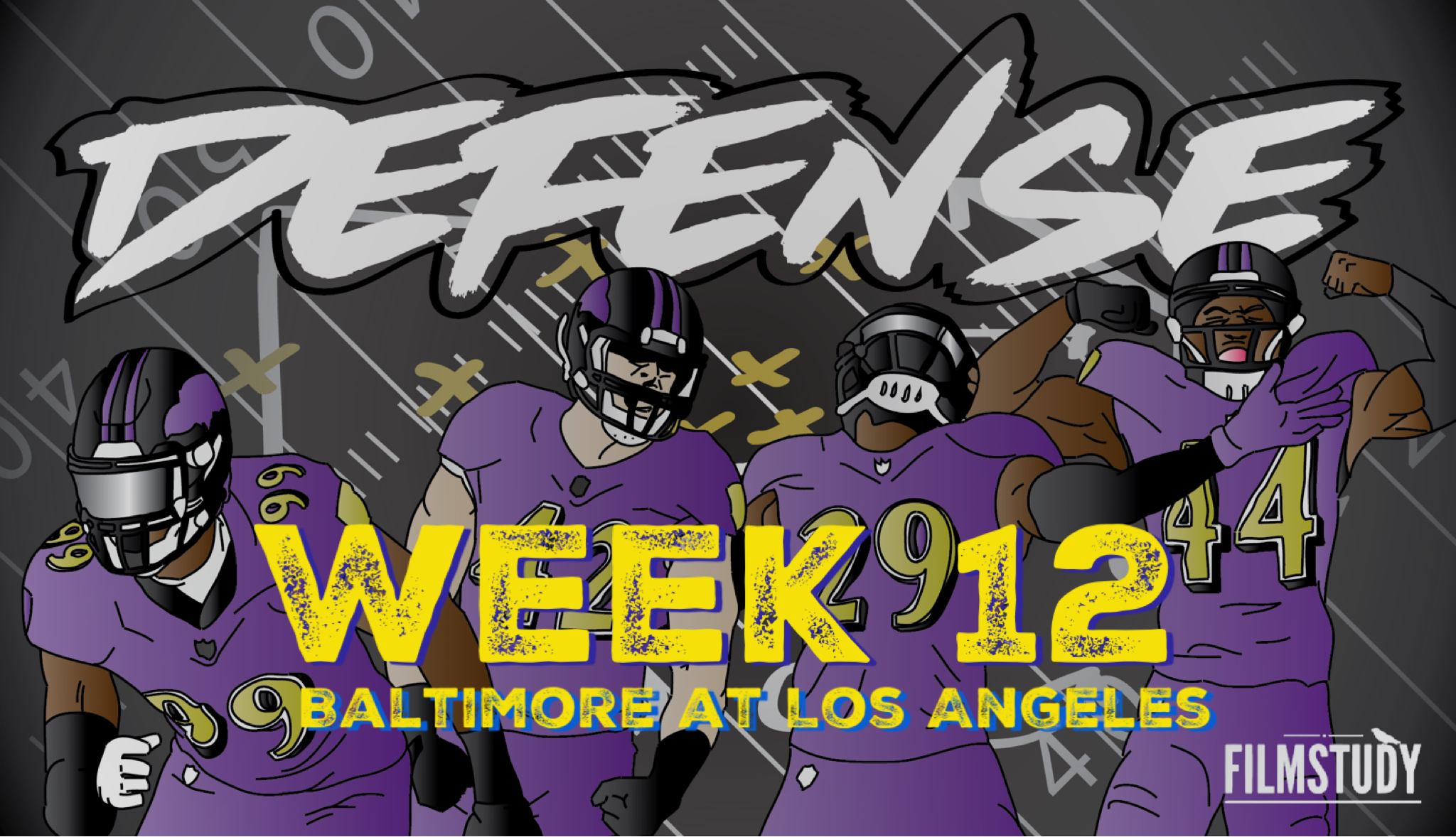